Wheelchairs Can’t Sit with Us 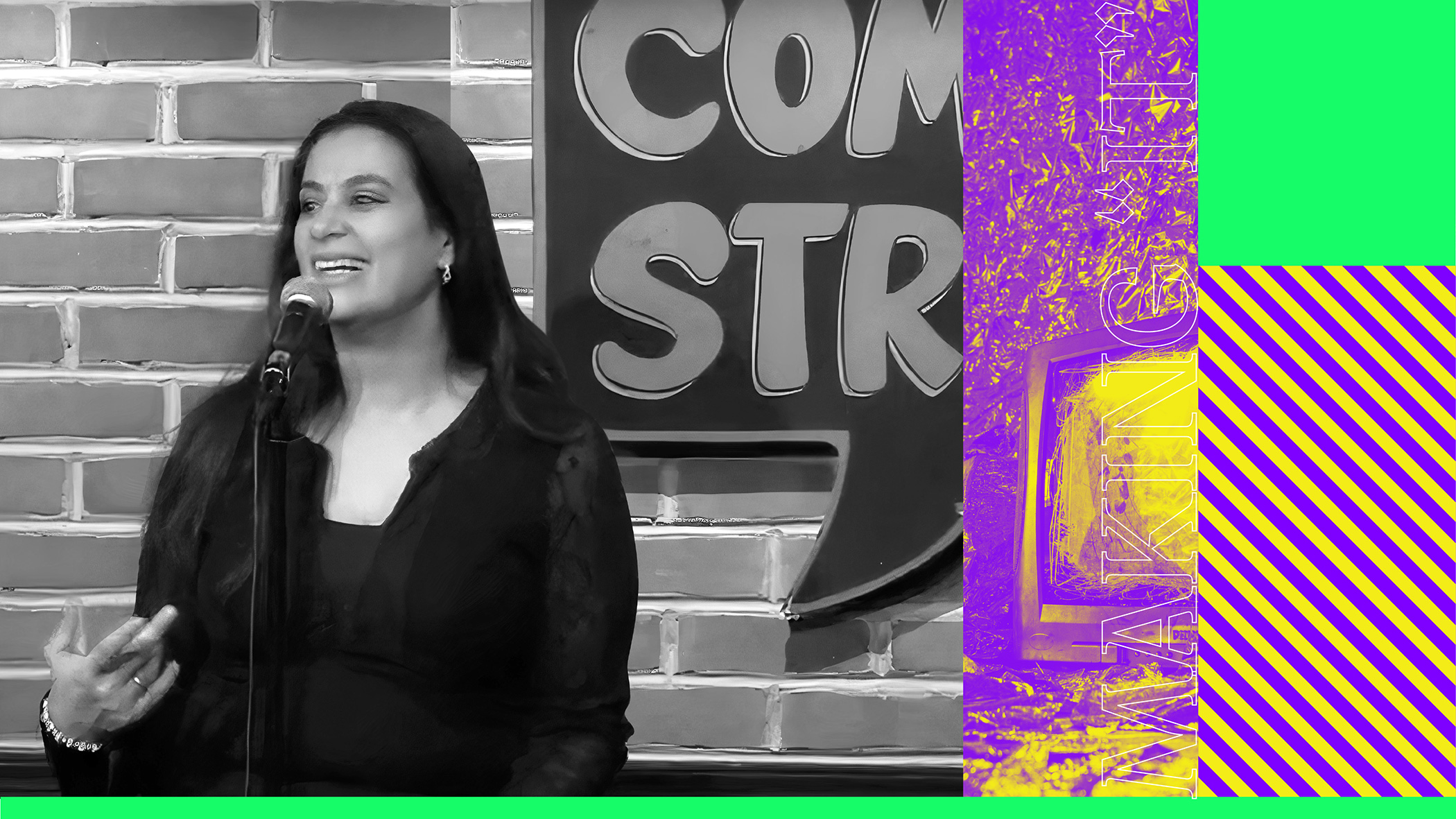 I am an entertainer and I was born that way.

On my birth day, the doctor who delivered me botched the job and gifted me with cerebral palsy (CP). I made my Oscar-worthy debut in Englewood, NJ, many moons before the Americans with Disabilities Act was even a glimmer in its signer’s eyes. I grew up in a time where preexisting conditions like mine weren’t covered by most insurers. My parents couldn’t afford physical therapy, so they sent me to tap class. Occupational therapy was also too rich for our blood, so I learned to tickle the ivories instead. I had visions of starring on Broadway dancing in my head. 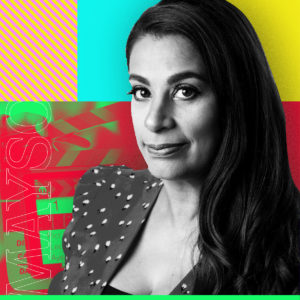 A Broadway diva burst my bubble by insisting that my spasticity would stop me from ever making it on the Great White Way. I was 12 years old when I attended a dance convention at the Waldorf Astoria in New York City. We were asked to share our dreams. I gleefully announced that my dream was to be part of a Broadway chorus line. The dancer leading our session straight up told me that I was a cripple and I should find another dream. I was crushed. He totally shamed me in that moment but I had the last laugh. His suggestion that I “find another dream” became the title of my bestselling memoir. I refused to let him win. I never let go of my clogging goal and eventually I did tap dance on Broadway when I headlined the Arabs Gone Wild Comedy Tour. Even as an impressionable tween, I refused to let a person in power break me. Unfortunately for many others, being shot down the way I was is the end of their journey. Coaches, teachers, casting directors, and Hollywood power players must stop excluding disabled talent and insisting that we can’t be as good if not better than our nondisabled peers.

Disabled talent exists and it is finally getting the recognition it deserves. In 2019, I cheered as my friend and fellow disability rights advocate Ali Stroker broke barriers when she won a Tony Award for Best Featured Actress in a musical. Ali is a wheelchair user and her speech was a rallying cry for entertainment to be more inclusive. Ali took the stage, shining in a buttercup-yellow Rachel Antonoff frock. I got chills as she accepted the statue and said, “This award is for every kid who was watching tonight who has a disability, a limitation, a challenge, who has been waiting to see themselves represented in this arena. You are.”

Ali’s win was a win for the disabled community, but something was off. When she accepted her award, she entered from backstage instead of from the audience, where nominees usually await their fate. Then, when Oklahoma!, the musical that Ali was starring in, won Best Revival, guess who wasn’t on stage to accept the award with the rest of the company? The lone wheelchair user in the cast, Tony Award winner Ali Stroker. The American Theatre Wing failed to make the stage accessible from the audience, knowing that they had a multiply-nominated disabled actor who needed access. They managed to build a gigantic 3D snake that extended into the audience for the Beetlejuice number but couldn’t summon up a ramp.

Along with theater, Hollywood and the mainstream media have failed miserably. Disabled folks make up nearly a fifth of the population, according to the 2010 census, yet visibly disabled people are almost nowhere to be found in the media. Sadly, we currently have no idea how many people with invisible disabilities grace our screens. The stigma is so pervasive, even established celebrities fear disclosing their reality. Performers with invisible disabilities are often forced to pass. Up-and-coming actors and stage crew don’t want to scare employers away by disclosing chronic illnesses that could be debilitating and cause them to miss work. Those with mental health issues also fear disclosing their diagnosis due to stereotypes that paint them as out of control and dangerous. No one should feel pressured to pass. Visibly disabled talent has no choice but to acknowledge their disabilities. There’s simply no hiding it.

Whether visible or invisible, disabled folks are rarely allowed to tell our own stories. If by some miracle, a disabled character does exist, they are only allowed one of three tropes:

I grew up watching these tropes play out on my favorite show of all time, General Hospital. Soaps are famous for having the romantic lead become disabled due to some horrifying plot twist. In a Daytime Emmy Award–winning performance, they shriek about how they wish they had died on that terrible day. Finally, love heals them. They toss their crutches in a woodchipper and walk down the aisle to live happily ever after, until they inevitably cheat, as soap characters are known to do.

From an early age, my goal in life was to be on General Hospital. It never occurred to me that my inability to be cured by Cupid would exclude me from achieving that desire. In pursuit of my passion, I studied theater at Arizona State University, where I fought and lost my first battle against discriminatory casting. I got As in all of my acting classes but did not land the role of a character with cerebral palsy in a stage play. The part went instead to a non-disabled actress.

College did a fantastic job of preparing me for my future. Hollywood has a sordid history of having non-disabled actors play visibly disabled on screen. I believe that visible disability, much like race, cannot be played and attempts to do so are cartoonish, inauthentic, and offensive. Not everything can be acted. Denzel Washington is never playing Hillary Clinton in a biopic, so Leonardo DiCaprio had no business badly acting intellectually disabled in What’s Eating Gilbert Grape.Not only should disabled roles go to disabled talent, roles that are not written as disabled should be fair game too. Post-graduation, auditioning in New York City was useless. If parts weren’t written as disabled, casting directors wouldn’t even consider me. When I turned on my TV, I didn’t see people who looked like me except in the world of comedy, so I decided to become a comedian. CP-me fit in perfectly, even though I was the opposite of what Hollywood considered perfect. Standup comedy is like the Island of Misfit Toys. Disabled artists are the ultimate misfits. Also, my cerebral palsy is not obvious. I kind of look drunk all the time, so I really fit in at the clubs.

At one such club, Adam Sandler saw my set and cast me in his 2008 blockbuster, You Don’t Mess with the Zohan. Sandler and his crew at Happy Madison were all about making the soundstage 100% accessible to me. They added a ramp on my trailer and gave me a dresser to help with costume changes. A dope dude named Darryl drove me to and from set in a silver Mercedes golf cart. It was heaven and I assumed all sets were compliant with the Americans with Disabilities Act, which recently celebrated its 30th anniversary. They most certainly are not.

Two years later, I landed a gig as a contributor on the cable news program Countdown with Keith Olbermann. MSNBC’s studio at the famed 30 Rock in New York City was an obstacle course riddled with steps and cables. There wasn’t a chair in the entire building that didn’t spin or roll. I spent my entire debut desperately trying not to swivel offscreen. Years after my stint on Countdown ended, I tweeted the network and offered to buy them a removable ramp after one of their hosts said live on-air that a guest who was a wheelchair user had to appear remotely because the studio was inaccessible. I was never invited back as a pundit again.

My nefarious plan to use comedy to break into Hollywood finally paid off when I sold my semi-autobiographical sitcom to a major network. I had never helmed a show before, so I was paired with a head writer who was non-disabled and chose to ignore me. The result was ableist, unfunny, inspiration porn. I was forced to burn it to the ground. I had spent my entire career battling misconceptions of disability and negative stereotypes of Muslims and Arabs. I refused to be complicit in harming the community at large in exchange for a star on the Hollywood Walk of Fame.

Misrepresentation of disability on screen is a reflection of the lack of disabled writers, producers, and directors behind the scenes. Disabled voices backstage are just as crucial as those on the marquee. Without them, our stories will continue to be told through an ableist lens. The need to cast disabled actors and employ disabled crew behind the scenes goes beyond authenticity. The disabled community has $8 trillion worth of buying power. One in 3 households includes a disabled person. We are a fantastic investment. The myriad of competing platforms want viewers, and disabled stories draw them in. Need proof? Disabilities win awards. Casting authentically will make bringing home the gold a sure thing for the networks that dare to put us in the spotlight.

I finally got my big break when I was cast as Zahra Amir on—wait for it—General Hospital. Unlike so many soap divas before her, Zahra can not be healed by love. The character is not written as disabled. She’s disabled because I, the actress who plays her, am. My time on the soap has been short but the disabled fanbase is incredibly loyal. Hollywood needs to follow General Hospital’s lead.

Positive images of disability in media can save lives. So much of what I learned about life, I learned from watching TV. Entertainment has the ability to make the world a better place.

Authentic depictions of disability would make becoming disabled, having a disabled child, and most important, being disabled less of a terrifying unknown and more of a fact of life. Disabled people work, we study, we fall in love, we get in fights, we fail, and some of us physically do nothing—which is totally fine too. Disabled characters need to reflect the diverse community they represent. We are not all superheroes and we are not all happy white snowflake angel babies. There are countless stories to be told and it is far past time that Hollywood lets us tell our own. Disabled stars are ready for our closeup.

Maysoon Zayid is an actress, comedian, writer, and disability advocate. She is a graduate of and a Guest Comedian in Residence at Arizona State University. Maysoon is the co-founder/co-executive producer of the New York Arab American Comedy Festival and the Muslim Funny Fest. She was a full-time on-air contributor to Countdown with Keith Olbermann and a columnist for The Daily Beast. She has most recently appeared on Oprah Winfrey Networks In Deep Shift, 60 Minutes, and ABC News. Maysoon had the most-viewed TED Talk of 2014 and was named 1 of 100 Women of 2015 by BBC.

As a professional comedian, Maysoon has performed in top New York clubs and toured extensively at home and abroad. She was a headliner on the Arabs Gone Wild Comedy Tour and the Muslims Are Coming Tour. Maysoon appeared with Adam Sandler in You Don’t Mess with the Zohan and has written for VICE. She limped in New York Fashion Week, is a recurring character on General Hospital, and is the author of Audible’s Find Another Dream. www.Maysoon.com