Writing Their Own Story: Two Undocumented Artists on Their New TV Pilot 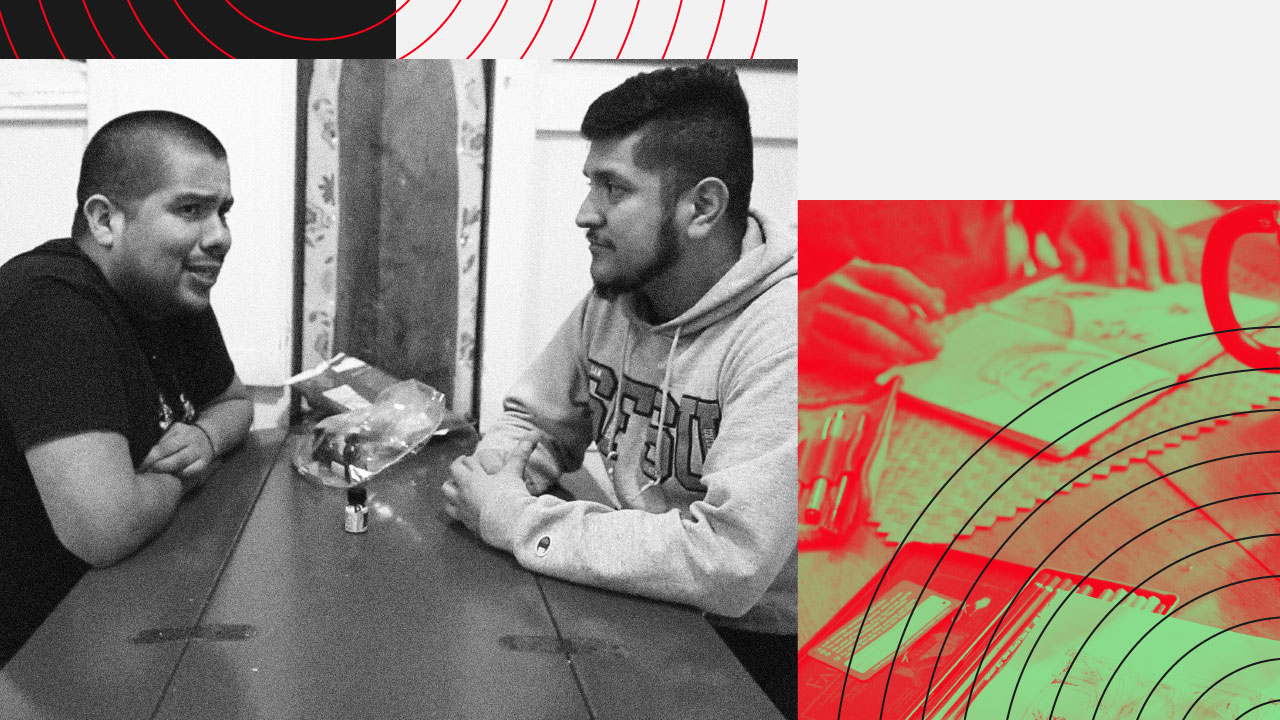 Largely in response to the current administration’s false narratives and dangerous policies, immigrant storylines have recently begun populating the television landscape. But most undocumented immigrant characters are relegated to the background—and undocumented immigrants are not crafting these narratives. Two longtime friends and artistic collaborators are hoping to change that.

For the past year, Julio Salgado and Jesús Iñiguez have been working on a television show that will combat anti-immigrant rhetoric and disrupt common narratives about undocumented immigrants, all while making people laugh. The pilot mirrors their own lives and tells a rarely seen story of a “homo-hetero” friendship in which both characters are navigating the realities of being undocumented in today’s polarized landscape.

Salgado and Iñiguez’s friendship and creative partnership spans a dozen years and was sparked by their mutual interest in creating their own media. In 2010, Iñiguez launched the multi-disciplinary platform Dreamers Adrift to “take back the undocumented narrative.” Through the platform, the duo created a web series called Osito in 2014. The debut focused on Salgado’s first dive into online dating, but the central theme of the series was Salgado and Iñiguez’s Odd Couple–like friendship.

The self-taught team are writing their current television show with support from CultureStrike, a national organization that develops artists and storytellers with a focus on incorporating social impact into the creative practice. CultureStrike—soon to become the Center for Cultural Power—is expanding its scope to focus on field-wide practices, including investing in emerging voices of color in television and film. Since its launch as a migrant artist-led national arts organization in 2011, CultureStrike has created space and provided resources to impactful migrant artists and culture makers, including its writers’ retreat UndocuWriting, its multimedia festival UndocuNation, and pop-up UndocuFilm exhibitions.

Also collaborating with Iñiguez and Salgado is Aurora Guerrero, who wrote and directed the 2012 film Mosquita y Mari. Guerrero is now working in television, having recently directed episodes of OWN’s Queen Sugar, CBS’s The Redline, and Netflix’s 13 Reasons Why. The activist and filmmaker has spent her career working to uplift voices that often go unheard and opening doors for other Latinx creatives.

When Guerrero first stumbled across the work of Iñiguez and Salgado, she knew it was something special. “I encountered their work early on, around 2013, because I was developing a project centering a gay, undocumented man. As I started to dive into research, I kept coming across their short films again and again,” Guerrero said. “I thought their work was incredibly funny and in a way that wasn’t just for humor’s sake. There was definitely political commentary to their work and I loved that. I still haven’t come across any other work that is quite as bold in its content.”

When Guerrero learned that the young creatives were actually undocumented and Salgado was gay, she became more committed to the work. “It’s a rarity in media for those churning out the stories [of diverse communities] to actually be members of the community they’re shining a spotlight on,” Guerrero said.

With support from CultureStrike, Guerrero has mentored Iñiguez and Salgado on their upcoming project, including introducing them to agents, helping them advance characters and storylines, craft their pitch, and finalize a pilot script.

“A lot of doors have opened for me in the television world, and I want to explore this world with Julio and Jesus,” Guerrero said.

Iñiguez and Salgado also intend to use their show as a pipeline for undocumented creatives. If the show is picked up, they will work with a rotating cast of contributors, providing as many undocumented folks as possible with hands-on experience on a television show.

CultureStrike is supporting this new pipeline by expanding on its partnership with Iñiguez and Salgado. The arts organization is creating what may be the first-ever undocumented artist incubation space, using nearly a decade of experience with storytelling, video narrative, performance, and visual art to support undocumented artists to tell their stories.

“CultureStrike has always prioritized artists, and understands the power of stories,” Salgado said. “A lot of this has been highly experimental, but we’re figuring out what works so that eventually we have a methodology to help other undocumented storytellers break into pop culture.”