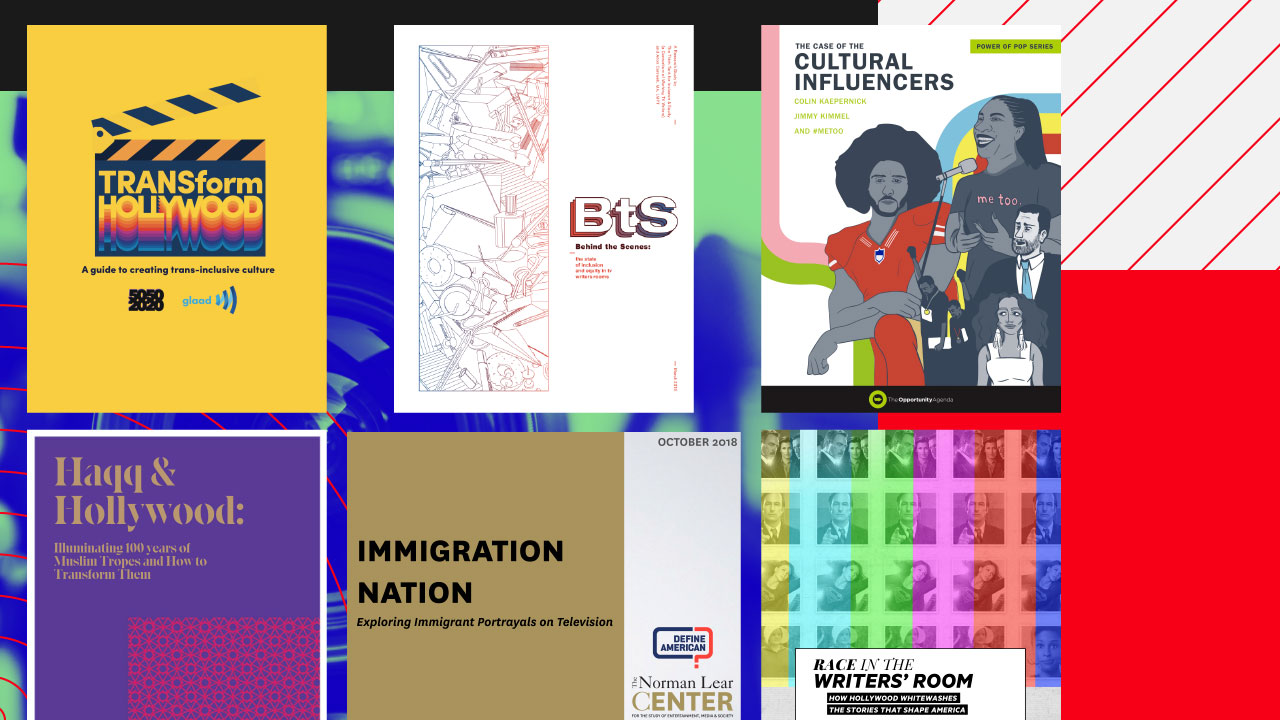 We’ve culled social change organizations, entertainment artist networks, and issue experts for this host of insights, statistics, and guidance for those working in philanthropy, social justice, and entertainment.

Behind the Scenes: The State of Inclusion and Equity in TV 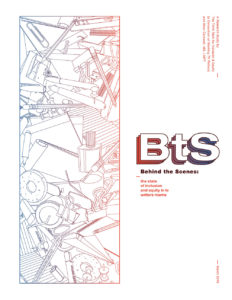 The Think Tank for Inclusion and Equity (TTIE), a consortium of working television writers, released “Behind the Scenes: The State of Inclusion in TV Writers Rooms,” a report detailing the career and creative barriers faced by diverse writers in the TV industry. This is the first survey of  working TV writers on the bias, harassment, and discrimination they face in the industry.

The report asks the Writers Guild and industry players to commit to “an independent third-party reporting system” for bias, discrimination, and harassment, in order to enforce sanctions for offenders as well as to provide transparency while implementing these steps.

The Case of the Cultural Influencers: Colin Kaepernick, Jimmy Kimmel, and #MeToo 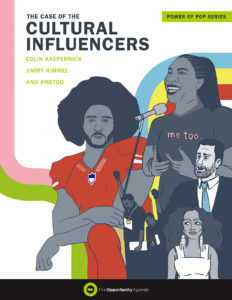 As part of its Power of Pop report series, The Opportunity Agenda released The Case of the Cultural Influencers: Colin Kaepernick, Jimmy Kimmel, and #MeToo, examining three cases of high-profile entertainers and athletes speaking out or advocating for a social and/or policy change. This report aims to better understand the unique influence of high-profile athletes and entertainers, as well as provide practical recommendations for those seeking to work directly or indirectly with cultural influencers to shift narratives and effect policy change.

Questions addressed in the report include: Under what circumstances do cultural influencers have the greatest ability to achieve their goals? Are cultural influencers’ interventions best suited for long-term cultural change, short-term policy shifts, or other types of impact?

The findings demonstrate that strategic engagement from high-profile influencers can have significant impact on social advocacy campaigns. For example, since Colin Kaepernick and other athletes began taking a knee, news media coverage of police misconduct has nearly doubled (from an average of 4,000 articles to 7,000 articles published every 12 months), and social media engagement with the issue has seen a nearly threefold increase. And since the #MeToo movement first began to proliferate in October 2017, more than 800 high-profile figures have been publicly accused of harassment, sexual assault, rape, workplace misconduct, and/or  related behavior.

The Opportunity Agenda just launched their newest tool, Working with Cultural Influencers: 10 Tips to Spark Change, based on the report, which provides useful guidance for folks who are looking to leverage influence and increase their impact.

Haqq and Hollywood: Illuminating 100 years of Muslim Tropes and How To Transform Them 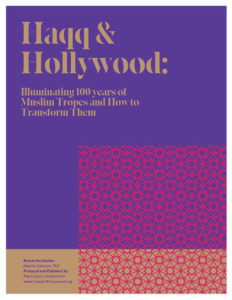 Terrorist, belly dancer, sheikh: these are just a few of the tropes about Muslims that have dominated American film and television screens for more than a century. Too often, these negative and false ideas give fuel to anti-Muslim public sentiment and punitive public policies. Yet there is hope. In the last few years, more authentic and nuanced stories reflecting the diversity and complexity of Muslim communities have started to emerge from Hollywood.

Researched and written by Pop Culture Collaborative Senior Fellow Maytha Alhassen, PhD, Haqq and Hollywood: Illuminating 100 years of Muslim Tropes and How To Transform Them synthesizes decades of scholarship and cultural criticism to shine a light on the myriad ways Muslim people’s identities, needs, and experiences have been distorted in television and film over the last century.

Recommendations include encouraging stakeholders to understand the diversity of Muslim communities, build and expand creative and career pipelines for Muslim artists in entertainment, and invest in Muslim communities’ ability to advance long-term narrative change and participate in the pop culture for social change field.

The Hollywood Disability Inclusion Toolkit: The RespectAbility Guide to Inclusion in the Entertainment Industry 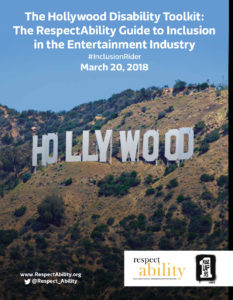 With Hollywood striving to boost diversity, opening the inclusion umbrella for America’s largest minority – the one-in-five Americans with a disability – is the right thing to do. The success of films like Black Panther, Wonder Woman and Coco prove that diversity wins. According to Nielsen Research, consumers with disabilities represent a $1 billion market segment. 1.2 billion people on earth have a disability. When you include their families, friends and associates, that total expands to more than $1 trillion. Americans with disabilities represent the third largest market behind Baby Boomers and the mature market.

However, storytellers often make glaring, yet easy to avoid, errors when covering our community. The purpose of the The Hollywood Disability Inclusion Toolkit: The RespectAbility Guide to Inclusion in the Entertainment Industry is to help entertainment professionals who wish to ensure they are as inclusive of people with disabilities as possible. 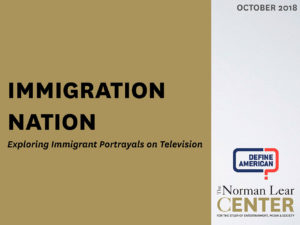 Define American—a media and culture organization focused on the power of story to transcend politics and elevate the conversation on immigrants—joined forces with USC Annenberg Norman Lear Center and The Hollywood Reporter to release a study about how immigrants are portrayed on television shows. Immigration Nation: Exploring Immigrant Portrayals on Television examines 143 episodes from 47 series that aired in 2017 and 2018. Researchers observed how immigrants and immigration issues were depicted and compared these depictions with the reality of the immigrant experience. The report finds that immigrants on scripted television are portrayed as less educated and more likely to commit crimes than in reality, and that immigrant characters are often represented as undocumented (41 percent of TV immigrant characters are undocumented, while less than 25 percent of immigrants actually are). And while the immigrant crime rate in the U.S. is lower than that of native-born Americans, 24 percent of immigrants in TV are involved in criminality.

Race in the Writers’ Room 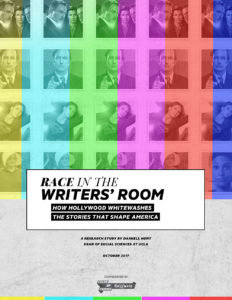 The nation’s largest online racial justice organization, Color of Change, released a report, Race In The Writers’ Room, highlighting the failure of the television industry to hire Black writers and other writers of color, and how this failure advances harmful stereotypes of Black people in television content. The study examines all 234 of the original, scripted comedy and drama series airing or streaming on 18 networks during the 2016-17 television season. According to the research, networks and streaming companies are systematically excluding Black talent from the writers room. Strikingly, 65% of all writers rooms had zero Black writers, and less than 5% of writers were Black. These hiring decisions are made by showrunners, 91% of whom were white and 80% male. Recommendations range from mandating genuine inclusion at all levels of the hiring process to asking showrunners to develop a more regular, credible process for engaging outside expert groups when sensitive issues of race are at play in storytelling. 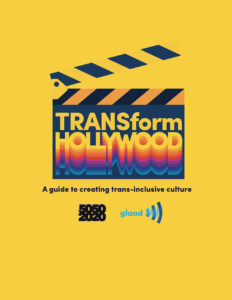 Eighty percent of people in the United States say they don’t know a single trans person at home, work, school, or socially. That’s why authentic representation in Hollywood is so crucial. Enter 5050by2020’s TRANSform Hollywood, a guide created in partnership with GLAAD, aimed at industry players: writers, directors, producers, and casting agents. The guide seeks to answer questions creators might have in crafting trans storylines, hiring trans creatives, ensuring a trans-inclusive work environment, and much more. Want to make content with transgender and/or nonbinary characters? Seek out and get to know trans storytellers and creators—suggests the guide—take it slow, meet and greet, build relationships. Just like any other artists that you bring in who may not share your same background, be aware of the lens through which you see things.