Out of Prison, Into Television: Emil Pinnock Is Creating the Next Generation of Writers

Scene from “Up North”

In a heartbreaking moment of the pilot episode for Up North, Trey, a black teenager accused of a crime he didn’t commit, is on a bus to New York City’s main jail at Rikers Island. On his way to the detention center, Trey (Ian Duff) questions the other arrested adolescents about what to expect.

“I mean, I heard stories on my block,” Trey asks. “But what’s it really like?” 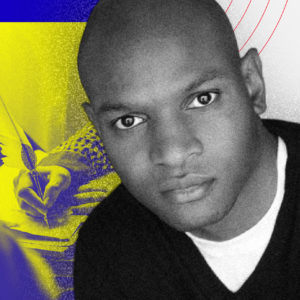 This question was hauntingly familiar to Emil Pinnock, whose own experiences inspired him to create Up North, an independent television series about incarceration and the criminal justice system.

In the ‘90s, Pinnock was a child actor, appearing in Reading Rainbow and the 1998 film Beloved, starring Oprah Winfrey. But in 2001, on his 19th birthday, he and his friends were pulled over in Queens, New York, and arrested for possession of a firearm. The judge issued high bails that their families could not afford, and the young men were sent to Queens Detention Center on Rikers Island for several weeks, until their trial date. Pinnock said his lawyer discovered a gun had been logged into the system 47 minutes after they were booked, an abnormally long period of time, according to experts. They were eventually cleared of the charges and released.

The incident shaped his approach to his television career, the kinds of stories he wanted to tell, and the build out of a writers room model that would fully integrate authentic voices into the storytelling from the very beginning.

“Up North is a television series that is based on a young man who is going to prison for the first time,” Pinnock said. “He is innocent of a crime, and he goes into prison and you see how the system turns this young guy who is innocent and educated into a monster at the hands of a system that didn’t offer him a fair trial or any justice.”

Driven by his own history in both entertainment and the criminal justice system, Pinnock moved to Los Angeles and sat in on various writers rooms. There he saw white men talking about how they perceived single black mothers and white women exploring how conversations would sound between Latino men.

After conceiving of the show under their production company Unleashing Giants, Pinnock and his producing partner Chiké Okonkwo were determined to make Up North independent, and true to its voices and experiences. To do so, they raised financing from three investors to ensure that the pilot remained independent from the studio system during its development and production. Second, they built a writers room that incorporated formerly incarcerated people as equal partners in the writing and creative process.

They shot the pilot in 2017, even going inside the Queens Detention Center where Pinnock was originally jailed. The pilot went on to win four awards that year at SeriesFest, which honors independent television. In 2018, the Pop Culture Collaborative supported the Unleashing Giants team to extend their writers room model and finish the development of Season 1.

“We knew that if the pilot was produced with the restraints of a major studio or production company we wouldn’t have the freedom to tell stories that are never told, and hire people who are never hired,” Pinnock said. “That freedom would be taken from us, and we wouldn’t be able to create a unique authentic vibe.”

To build the writers room for the series, Pinnock called upon those who were formerly incarcerated, including childhood friends Matthew Shaw and Kevin Mitchell, to share stories with writer Ian Robertson, and to gain skills and knowledge about the writers room process. Pinnock brought in a total of 12 formerly incarcerated individuals, four of whom worked on the pilot. The goal was to have “each character’s arc supported by an authentic voice,” Pinnock said. The consultants, ranging from an adolescent to adults who served 25 years in prison to mothers who have served time, were an integral part of building character arcs and storylines, Robertson added.

“At this point, I am reluctant to call myself ‘the writer,’” Robertson says of his experience with Up North. “If the 20th century was a lot of people writing about things that are outside of their experiences, I think 21st-century writing is all about people from within the experience telling the stories themselves.”

“At first, it felt kind of funny,” Shaw, a 37-year-old father of two daughters. He had been convicted of criminal possession of a weapon in the second degree in 2005 and served 3.5 years. “But you got used to it. I could see that they weren’t judging me. They were really listening and trying to get to the heart of the story.”

Pinnock acknowledges that there are people who thought he was crazy for bringing convicted felons into a writers room. But their representation was crucial. “A lot of these voices are not going to have the checkmarks for the things that are supposed to get you in a writers room,” Pinnock explains. “But they can contribute as much as experienced writers.”

After the first round of excited reaction to the pilot including the SeriesFest win, Pinnock and Okonkwo began talking to various studios and networks. They repeatedly ran into barriers, from skepticism about their determination to retain ownership of the show to being told that the network “already had their black show.” But the team had a relentless belief that their series would be acquired by a network that supported their vision.

It was at a meeting with Carolyn Folks, co-founder of Entertainment Studios, when it all changed. Folks, who is Entertainment Studios owner Byron Allen’s mother, had set up an hour-long meeting with the Unleashing Giants team—one that ended up lasting nearly four hours. She said her team was very drawn to Up North’s writers room process as well as its access to Rikers’ Island. Since then, Entertainment Studios acquired Up North for their streaming services, including The Grio, while still allowing Pinnock to independently own the show. Folks has become Up North’s executive producer.

The Up North story has already made an impact on some of the people involved in the series. Its cinematographer, Eric Branco, was the director of cinematography for Clemency, starring Alfre Woodard, which won the Grand Jury Prize at Sundance in February. Mitchell has already flexed his writers room knowledge by contributing to the production of the YouTube series Prey Before You Eat. Shaw says he hopes to create a TV series about black family life and has been studying TV and film—just as Pinnock did when he was first looking into behind-the-scenes work in Hollywood.

“Up North is a resource to provide people unique opportunities,” Pinnock said. “Whether it’s as a showrunner or a cinematographer, that’s the legacy we want our approach and writers room model to continue to leave.”

Erin E. Evans is a writer and editor in Brooklyn, New York. Her work has appeared on Mic, BET and The Root, where she has covered the intersection of race, culture and social justice.