TO CREATE A JUST AND PLURALIST SOCIETY, WE NEED TO REIMAGINE SYSTEMS AND TRANSFORM CULTURE.

Throughout America’s history, the most transformative political advances—from slavery abolition to Reconstruction, “I Have a Dream” to the election of Barack Obama, the DREAMers, Love Is Love, and the Movement for Black Lives—have been achieved by organizers, artists, and movements working together to awaken and harness people’s deep yearning to belong in a pluralist America. In each case, the cultural tug of war between belonging and exclusion sparked a portal moment—a cracking open of the public imagination—through which we can see a glimmer of the pluralist nation we could become.

Our nation is now in the midst of another such breakthrough: a once-in-a-generation moment when tens of millions of Americans are actively choosing to meet at the riverside, wade into the water, and begin the hard and delicate work of belonging together in a just society. With the 2020 election behind us, the COVID-19 pandemic challenging us to recommit to our civic purpose, and the killing of Black people by police still fueling widespread demands for structural change, important questions are moving to center stage: How will the American people respond to this call for transformation? Will we retreat back into the habits of exclusion and violence that stain America’s past, or will we step boldly on to the path towards a pluralist future?

The Becoming America Fund brings together entertainment, philanthropic, and social justice leaders to immerse millions of people in a galvanizing story of the pluralist nation we are becoming. The Fund supports artists, creative companies, social justice organizations, cultural organizations, consumer researchers, fandom organizers, and cultural strategists who are calling on Americans to reject the exclusionary systems that define our country’s past and present, and embrace the transformative ideas that can shape our future.

Developed in collaboration with hundreds of field partners over a two-year period, Becoming America centers the innovation of Black, Indigenous, People of Color (BIPOC), immigrant, and Muslim creators, organizers, strategists, and influencers, especially those who are women, trans, nonbinary, queer, and disabled.

*This list is updated as of May 2022. Stay tuned for updates on new grantees.

COVER IMAGE: As a Black woman, artist and trans rights activist, Shea Diamond elicits joyous pride in our fluid selves though dance hits such as  “I Am America,”  and holds our collective need to mourn, heal, and reconnect with ballads such as “Seen It All.”  Her songs reflect the power that pop culture has to expand public imagination, and that’s why we are so honored that Shea agreed to be featured as our Becoming America 2022 cover artist.

The Becoming America Narrative Network is working to seed a new narrative ocean in the United States, one that visualizes and normalizes the norms of pluralist culture—the hard and delicate work of belonging together—as the heartbeat of a just society. We invite you to immerse yourself in this content by visiting the Becoming America story portal. 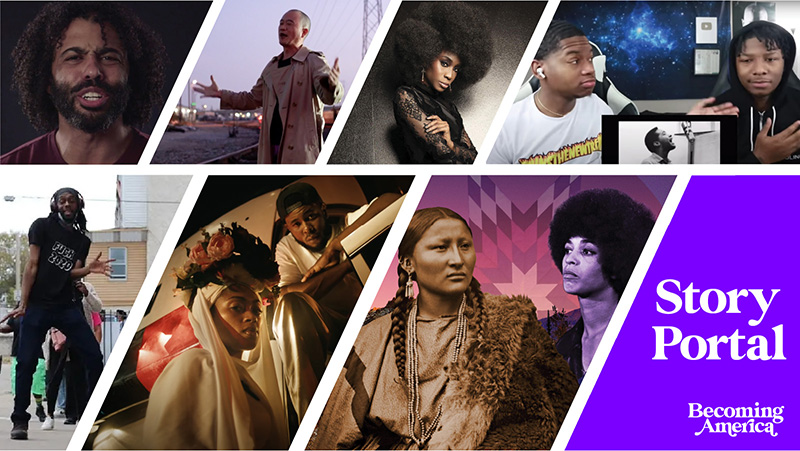