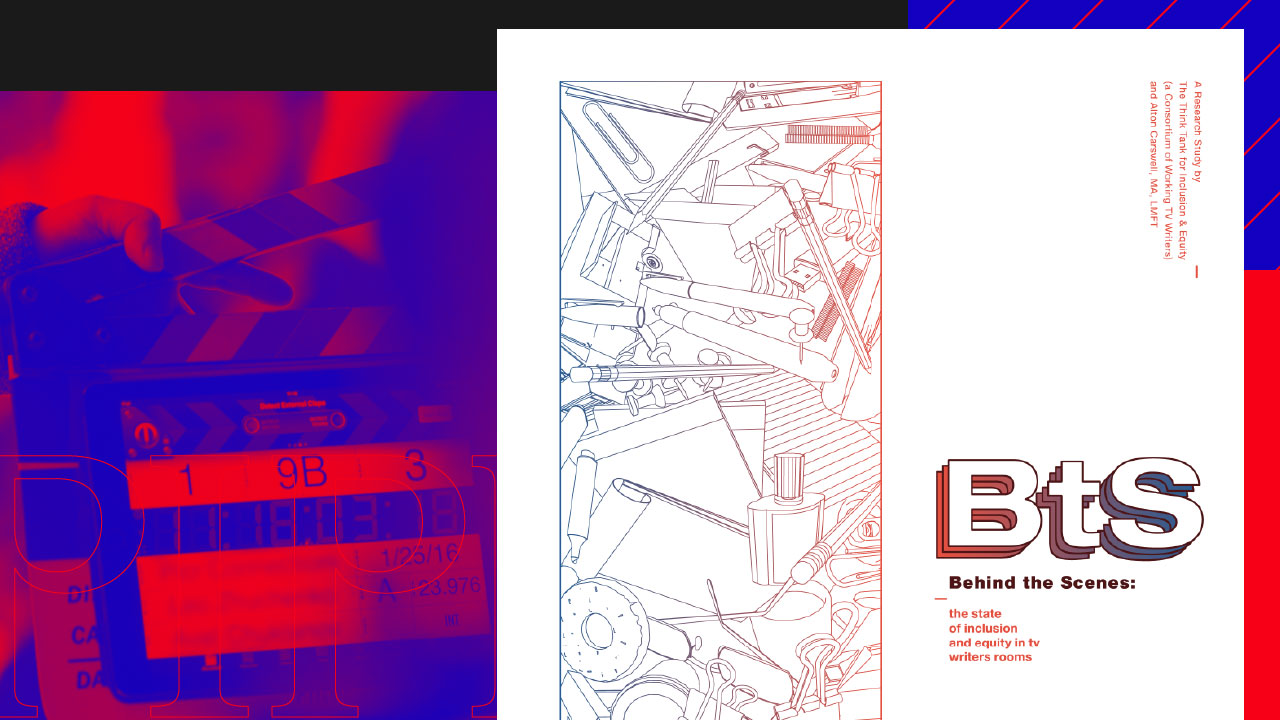 TTIE’s “Behind the Scenes: The State of Inclusion and Equity in TV Writers Rooms”

For the last decade, television writer Y. Shireen Razack has been working to prove that she’s not just a “diversity hire.” Razack, a woman of South Asian descent with Caribbean roots, currently a writer for NBC’s New Amsterdam, went through the CBS Writers’ Mentoring Program 11 years ago in order to break into the television industry.

From CBS to NBC’s Writers on the Verge, to Disney/ABC’s Writing Program, and Fox’s Writers’ Intensive, diversity fellowship/writing programs cover the salaries of diversity hires for production companies and television shows, as a way to ensure that writing staffs become more inclusive.

But Razack found that breaking in wasn’t the biggest barrier for her career. It was maintaining long-term career advancement in the industry she loves. In the ensuing years, Razack worked on two shows in their diversity slots, where she often felt like she was treated unfavorably compared to the rest of the writers in the room.

“You often have to prove yourself more than the other staff writers in the room because you’ve got this stigma on you that you are the diversity hire,” says Razack. It wasn’t until she landed her sixth writing gig on a series that she was promoted past staff writer.

She isn’t the only TV writer in Hollywood with this story, and in 2018 she joined with writer/creator Tawal Panyacosit Jr. to do something about it. Razack had established a big network of TV writers and producers through her career, and Panyacosit Jr. had a background in organizing for issues such as racial justice, LGBTQ rights, and immigrant rights. With the formation of Think Tank for Inclusion and Equity (TTIE), a self-organized consortium of working television writers, Razack and Panyacosit Jr. prepared “Behind the Scenes: The State of Inclusion and Equity in TV Writers Room,” a research survey funded by the Pop Culture Collaborative, which examined hiring, writer advancement, and harassment and bias among diverse writers. The report was released on March 15th, 2019 and received coverage in New York Times, The Hollywood Reporter, Deadline, Afro-Punk, Variety and Bustle.

Diversity problems in Hollywood have been documented in recent reports such as UCLA’s Hollywood Diversity Report and civil rights advocacy organization Color of Change’s “Race in the Writers Room.” The Color of Change report, which largely focused on the lack of black showrunners and writers, reignited an urgency to bring about change in the industry and inspired the “Behind the Scenes” report.

BY THE NUMBERS: WHAT THE REPORT SHOWS

The TTIE survey respondents included 282 writers who identify as female/non-binary, people of color, LGBTQ+, and/or people with disabilities. The report found that diverse writers: a) are often isolated in the writers room and possess little power to suggest changes; b) are often qualified but not promoted to higher titles; and/or c) are more likely to experience bias or harassment.

“We are writers, specifically TV writers in the trenches,” said Panyacosit Jr., who identifies as gay and is of Thai and Chinese descent, and is the writer for the streaming CW Seed series Life After First Failure. “The report is designed to give a more complete view of the struggles diverse TV writers face, and to provide data to help inform the programs and interventions that others are doing in order to effect change.” 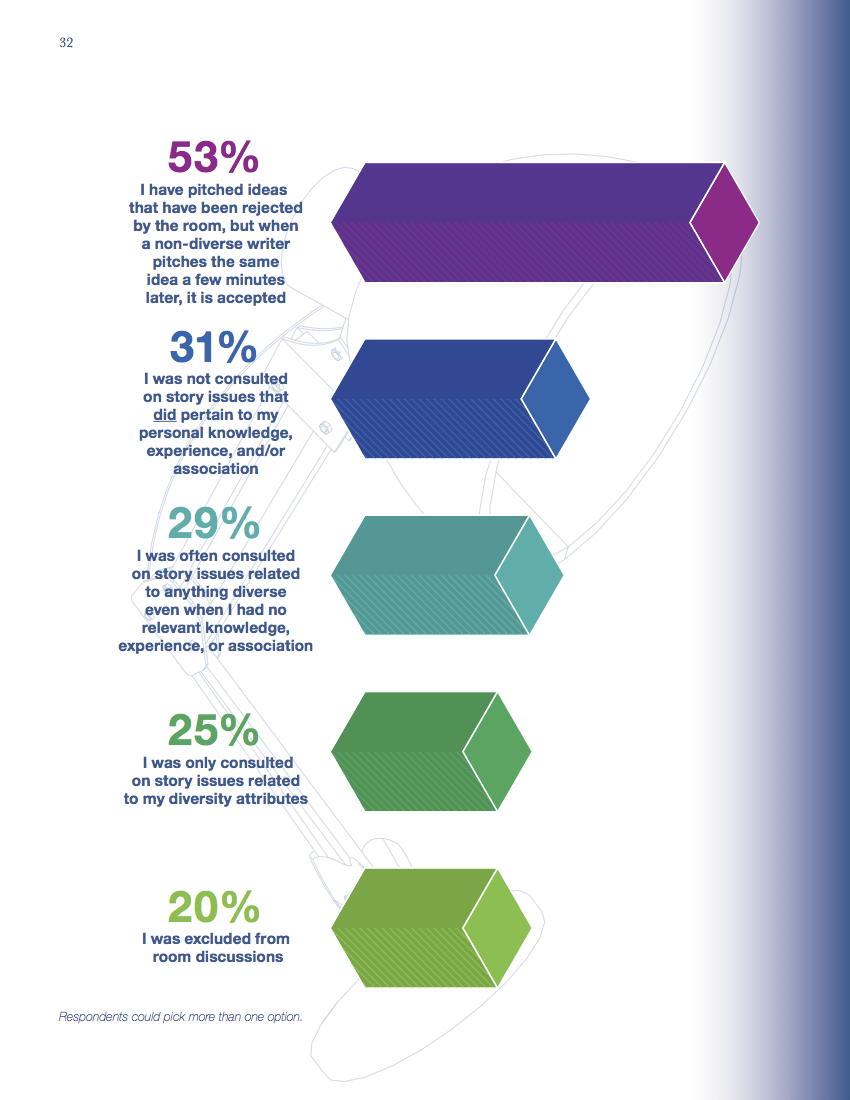 One respondent (all respondents were anonymous) recently completed her first season at a show as the only queer staff writer. She said that often those involved in staffing “see you primarily as the identity that you can bring to the table,” such as your race, gender, or sexuality. Tokenism was a big issue, the report confirmed, with the result that writers felt isolated and left out of the decision-making process.

And the problems don’t end there. Like many diverse writers, this respondent’s three-year contract leaves the traditional promotions from staff writer to story editor and executive story editor up in the air, stalling professional growth.

Alton Carswell, a media psychologist who has worked on social justice issues for the last two decades, served as a research consultant on the survey. He said one of their goals was to make sure the report actually “helped to work on future research, workshops, and better advancement.”

THE CALL FOR CHANGE

Respondents also included recommendations for major industry players, including networks, studios and production companies, agents, managers, showrunners, and upper-level writers and producers. In a rallying cry to industry leaders, with the apt hashtag #WriteInclusion, the report suggests that all players should work together to effect change in Hollywood by following three overarching principles: 1) seeking meaningful representation in hiring; 2) removing systemic barriers to advancement; and 3) fixing and formalizing the system to report bias and harassment.

In early February, TTIE hosted several two-day salons with 30 survey respondents to solicit feedback for the preliminary findings and recommendations. Participants also shared personal stories to help the organizers dig deeper into several issues. The room was full of energy, Panyacosit Jr. said, because for many of the people present, the experience provided further validation that diversity issues and discrimination they had experienced were a shared struggle among their peers. That there was finally intersectional organizing—led by TV writers themselves—gave the sense that the needle was finally moving.

More than 100 writers, producers and showrunners have already signed an open letter to address diversity issues in TV writers rooms. From creators Lena Waithe and Jill Soloway to showrunners Gloria Calderón Kellett and Steve Lightfoot to writers LaToya Morgan and Joss Whedon, big industry names have joined the call to fix the industry by supporting the report’s recommendations. Razack said seeing this broad support “reinforces that having diverse perspectives in the writers room leads to better storytelling.”

Keeping track of the inclusion and equity data is one of the most important ways to ensure a more diverse future in TV writers rooms, the report found. Some additional recommendations:

“We hope it’s eye-opening,” Panyacosit Jr. said of the study and their recommendations. “I think a lot of people have thought that the issues diverse writers face were isolated anecdotes. This data shows that these issues are pervasive. We hope that the report’s recommendations are taken seriously and enacted, which could mean safer workplaces for everyone, as well as better stories and characters that appeal to a wider audience.”

Ultimately, the Behind The Scenes organizers hope that “everyone will be treated with respect in a safe, nurturing, and creative work environment regardless of their sex, race, religion, sexual orientation, or disability,” Razack concluded.

Erin E. Evans is a writer and editor in Brooklyn, New York. Her work has appeared on Mic, BET and The Root, where she has covered the intersection of race, culture and social justice.