In the Season 2 finale of the dystopian series The Handmaid’s Tale, viewers are left with a final image of Offred (Elisabeth Moss) in extreme closeup as she slowly walks back into the belly of the beast that is the Republic of Gilead. This defiant image, of a solitary person claiming her power, sets the stage for a third season filled with personal awakenings and acts of resistance.

What this popular series has not yet done is take viewers deep inside May Day, the highly organized resistance movement that orchestrated Offred’s numerous breaks for freedom and created an underground railroad for American refugees fleeing Gilead’s repressive regime. By zooming in on Offred as the heroic leader of Season 3’s anticipated fight, the show’s writers have inadvertently reinforced one of the most enduring—and problematic—ideas in American pop culture: big change happens when a lone hero finally takes up the fight.

This idea is neither helpful nor historically accurate. Whether during the slavery abolitionist era, suffragette and modern day women’s movement, civil rights struggle, or the Movement for Black Lives, it is clear that big change actually requires big groups. Yet Hollywood continues to produce stories shaped by the character arcs of solo heroes. The result is an American public that generally doesn’t have the instinct to band together to change their conditions.

Imagine if instead of a single character filling our screens and imaginations, the final shot of Handmaid’s Tale featured a smash cut out of Offred’s world and into the point of view of the May Day revolutionaries, signaling a Season 3 powered by their ingenious organizing and activism.

The Walking Dead—another show set in a dystopian near-future—is currently pivoting in this direction. While earlier seasons have featured storylines that cast doubt on the instinct to trust in groups or build community (even going so far as to promote fascist, xenophobic ideology, as Rolling Stone critic Sean T. Collins details in the Collaborative’s podcast, WONDERLAND), the current Season 9 takes a distinctly different approach. Picking up with life after the mysterious disappearance of the show’s hero, Rick Grimes (Andrew Lincoln), the story follows a large ensemble of characters from different communities as they work to establish a unified, pluralist society and economy. Like Elisabeth Moss’s Offred, The Walking Dead’s Michonne (Danai Gurira) is well-positioned to rise into heroine status, but instead opts to yield individual control in service of the group.

The Walking Dead mirrors the complexity of our times: as communities across America grapple with the spread of white nationalism—inextricably intertwined with toxic masculinity—writers of one of the world’s most popular dramas have leaned into the task of transforming fear of the Other into a bold vision of a pluralist future.

This is television’s superpower: immersing audiences in fictional worlds that challenge our perspective and catapult us into new ways of life. The current cultural climate calls for television writers and showrunners to do more, risk more, and put it all on the page. Can their stories inspire a public yearning for a pluralist America? We believe so. Can this newfound public desire activate millions of viewers to do the hard and careful work of belonging together in a just society, like the characters of The Walking Dead and other shows? Yes, it can. Whether it features handmaids or zombies, episodic television can help us all imagine what pluralist culture looks like: What will be expected of us? How should we behave? What are the risks, and benefits, of decrying injustice? What does it mean to be accountable to all people and the land we live on? 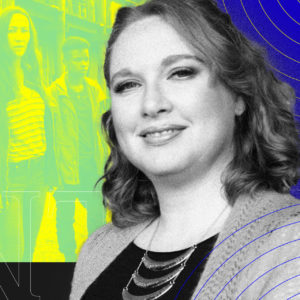 Profound behavioral shifts won’t come about simply by increasing representation of diverse characters (or actors) in popular culture. We also have to better understand how pluralist ideas are carried by these stories into mass culture. A spate of television shows has begun to test these waters. The Good Place, Russian Doll, and Schitt’s Creek brilliantly, and often hilariously, plot these soul-changing journeys over multiple episodes and seasons. Where the characters might start off as typical anti-heroes, through their experiences (and in the case of The Good Place and Russian Doll, their deaths), they learn the importance of and need for human connection. In the transition from selfishness to care, the characters ultimately embrace a core idea: You don’t need to do it alone. We are better and stronger, together.

Bim Adewunmi of BuzzFeed writes, “At the heart of these shows is a radical humanity—selling very convincingly the idea that while we might all die alone, the key to getting through life lies in the collective. That we must seek help, and we must band together, and keep those bonds strong, even when faced with difficult conditions. More importantly, we don’t need to be 100% good to enjoy this privilege of survival-kinship; it is merely part of the essential human contract.”

The goal of normalizing these values—encompassing the profound need for each other; the desire to rise, work, and love together; and the determination to collectively create a world rooted in justice and pluralism—currently drives a growing field of artists, social justice movement leaders, cultural strategists, research experts, and philanthropists.

BREAK THE STORY Volume III: Remaking Television explores the groundbreaking ways that these leaders are transforming the heart and soul of Hollywood. Together, their work is creating an understanding of who has the power, imagination, and ability to create the stories our society needs.

This volume dives into a range of artist-led approaches that are reshaping the way writers rooms are formed and how they work with communities. Multiple articles and a new infographic examine the barriers for historically excluded writers in television, and reveal pipeline interventions to overcome them. Additional original reporting highlights how social change organizations are forging partnerships with writers rooms, studios, and networks to place authentic voices of marginalized communities at the center of stories, and tracks the development of research and insights about television audiences that will change how content is created. Expert voices are in the spotlight, exploring the ways fans will shape television’s future and how philanthropy is finding its unique role in the industry.

This issue is dedicated to all the leaders working in and with the television industry to rewrite the story of our nation and unlock public imagination of its future. This is a new story, only now emerging, as social justice movements and pop culture industries become genuine collaborators. We promise the story will be riveting—and won’t end with a closeup on a single character, but rather, with a wide shot of millions of people doing their part to build a better society.