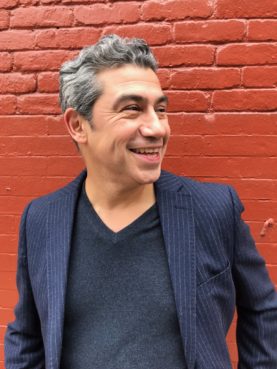 Luis Castro is a highly regarded innovator and strategist whose mission is to fuse storytelling and social impact. He is an independent producer and consultant who brings authentic stories by women and diverse creators to multiple platforms. His unique background working at senior levels in entertainment, philanthropy, and government gives him a fresh and comprehensive perspective on finding original voices and powerful stories that illuminate the kaleidoscope of the American experience—and that build greater inclusion in the entertainment industry.

As a producer, Luis works with storytellers to develop, pitch and produce scripted projects for TV and digital. As a consultant, he works with media companies and nonprofit organizations on creative talent development and inclusion. He advises companies and productions on philanthropic and social responsibility strategy and program development. Over his 25-year career, Luis has built pioneering initiatives that empower creators and communities alike.

Luis was an executive and consultant at HBO in Los Angeles, where he worked across HBO Films, Series and Cinemax to expand the network’s relationships with diverse creators, identify writers for existing shows, and find new scripted projects. Before joining HBO, Luis led corporate grant making as Executive Director of Philanthropic Initiatives at Time Warner in New York City. Among his achievements was the repositioning of the company’s giving to focus on supporting diverse voices in entertainment. His trailblazing approach to corporate philanthropy garnered the media giant multiple awards and national recognition. As Acting Commissioner of the New York City Mayor’s Office of Media and Entertainment, Luis oversaw the $30 million City agency charged with supporting and promoting New York’s $8.9 billion film and television industry. He led efforts to create career pathways for New Yorkers into the entertainment industry, including the creation of a training program for diverse editors and a groundbreaking program pairing up-and-coming writers with NYC-based show runners to serve as mentors. Prior to that, Luis served as First Deputy Commissioner, overseeing strategy and day-to-day operations as the agency’s second-in-command.

Before working in the entertainment industry, Luis was Director of Education Policy at the NYC Partnership. There, he devised and executed education initiatives and structured public-private alliances between leading New York corporations, the NYC public school system, and community groups. He began his career in Washington, DC, as a legislative aide to U.S. Senator Paul Simon, where he shaped education and school-to-work policy. He was then named a presidential appointee in the U.S. Department of Education during the Clinton Administration, where he advised on legislative issues and strategy.

Luis is a member of the Board of Directors of New Dramatists and the Sundance Institute Theater Program Advisory Board. He also serves on the Tony Awards Nominating Committee. Luis is a graduate of Harvard University